Smart Scale Sync is a services developed by Patrick Renschler from Renschler Labs LLC. I hope this Smar Scale Sync will help me to get the weight from the Renpho Smart Scale to Polar Flow (which I use in combination with the Polar Vantage M). 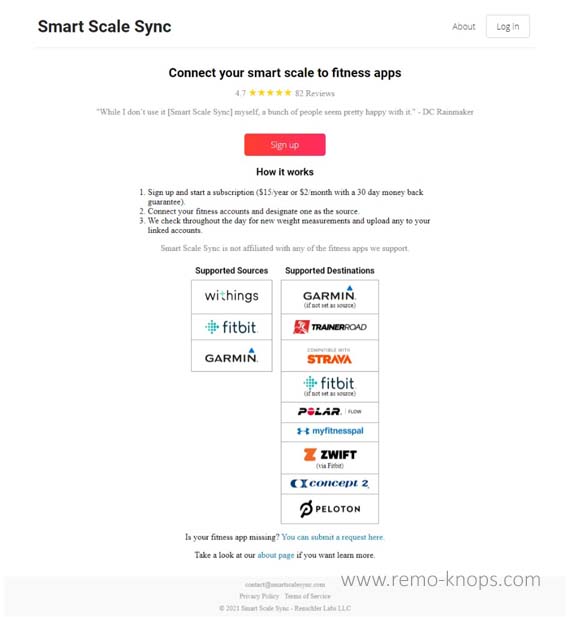 Renpho is not found in this list with supported sources for Smart Scale Sync, but on the About page you can read that:

There are several scales which don’t connect directly to Smart Scale Sync but they are still compatible because they connect with Fitbit. For example, the Renpho scale can auto-sync with Fitbit, and then you can set Fitbit to be your weight source in Smart Scale Sync.

So good news for all Renpho Smart Scale users.

I’m using a Polar Vantage M  multisport watch for about 2 years now. So in addition to TrainingPeaks, a lot of (complementary) data is in Polar Flow.

Unfortunately there is no out-of-the-box integration between Fitbit and Polar Flow, to sync the weight metrics. And while the Polar Vantage M has some impressive sleep tracking it is impossible to synchronize these metrics to for example TrainingPeaks. Although I can see the sleep related data fields available in the TrainingPeaks App (and underlying data model).

Smart Scale Sync will help me to get the weight metric from the Fitbit source platform into Polar Flow destination platform. 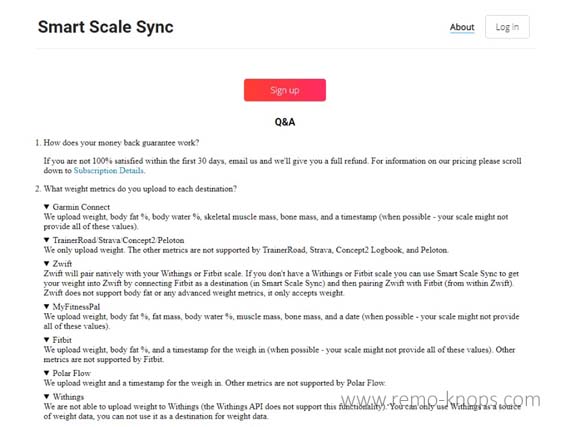 What weight metrics does Smart Scale Sync upload to each destination?

The list with supported destinations covers 9 different health platforms, which are grouped on the about page into 6 buckets where TrainerRoad/Strava/Concept2/Peloton are 1 group.

For each of the 6 groups you can read which metrics are uploaded to the supported destination platform. I’ve added the screenshot here above. 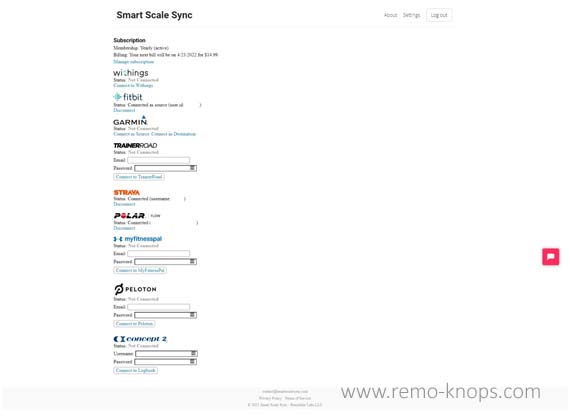 Patrick Renschler from Renschler Labs LLC. has jumped into a space where integration between online health platforms was missing.

Smart Scale Sync helps you to connect different fitness accounts and sync weight information from supported source platforms to supported destination platforms. The level of details depends on the destination platform. The backend and initial set-up are monkey-proof and minimalistic. So it is a one-time setup.

The yearly subscription fee is $ 15,– which is reasonable, but it is half the price of my Renpho Smart Scale. Please also note that there is also an offering of $ 35,– that allows you to sync all weight measurements (also the ones before setting up the data flow in Smart Scale Sync). This could be helpful for the athletes or more the power user type of guys and girls.

I really do hope that in a mobile and cloud online world the service designers en device manufacturers throughout the value chain will think more about standardization of API’s. I can get weight metrics from a € 30,–- smart scale into TrainingPeaks and not in Polar Flow. Also the advanced sleep metrics from Polar Flow I can’t get into TrainingPeaks. While this would require some collaboration of developers and engineers from both platforms it doesn’t seem an unreasonable question to get these integrations standardized.

Do you use a Smart Scale and if so which one ? Would you pay the $15,– subscription fee to have Smart Scale Sync distribute your metrics ?