The One Minute Manager has sold over 13 million copies and has been translated into 37 languages, which proves that a good and interesting book doesn’t have to be thick. With just 110 pages it provides a lot of information and examples to think about, and compare those with real-life situations. If found this book in relation to the “Getting Things Done” methodology, and ordered it right away. In the article below I provide a brief summary and my personal thoughts about the contents of this book. 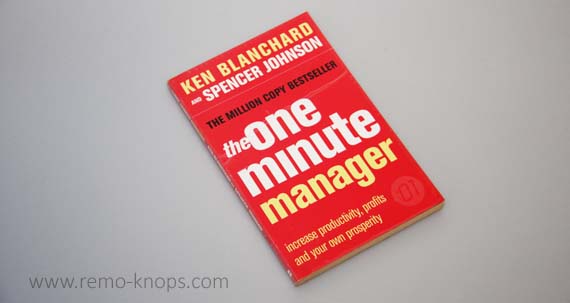 By incident I stumbled across The One Minute Manager book, with a short review emphasizing on the fact that good books don’t need to be long. So I ordered the book, and started reading it,  and I hope that it can help to be more productive or more efficient in everyday life, or leaves you with some new interesting insights you can build and think further up-on.

“Once there was a bright you man who was looking for an effective manager. […] work for one […] wanted to become one.” One of the essences that the researcher is struggling with is the balance between results and people. Some managers focus just on the end-result, and don’t care about the people and their behavior, while a manager can also pamper the people which he manages and forgetting about the results. These are the extremes of the spectrum, but a nice relation to investigate. The One Minute Manager has a plaque on his desk: “People who feel good about themselves, Produce good results” It may sound like an open door, but sometimes this is forgotten in everyday life, not only in business but also in our private lives.

The first step is goal setting, which is not only applicable to managers, but the steps can be applied to every situation. The most important one to me  are  (1) and step (3). If you work in a team there should be a full agreement of everyone on the goal the team is working to. Step (3) emphasizes to stick with the important facts, or let’s call it “the management summary”-approach. Try to be brief, and limit yourself to the important pieces of information that really matter to the problem.

The One Minute Manager summarizes it as “Help people reach their full potential, catch them doing something right” In the hard business world it are often the results that matter, and in that line of reasoning you just hear from your boss when something went wrong. Often these things are accumulated till the famous performance interviews. However the essence of the technique is right, a compliment for doing something right is a great stimulus to keep up with the good work. Managers often don’t take the time to compliment someone.

This chapter was highly interesting, because it’s very different of how in general reprimands are done. Sometimes it’s difficult to split the people from their behavior, especially reprimanding people and their behavior. The One Minute Manager describes it as: “We are not just our behavior, we are the person managing our behavior” If I were a manager I would pay extra addition to this chapter. However it is also a useful technique for clever people who can do their own goal setting and are pleased when they reach certain goals. In the book some excellent examples are made, also with respect to performance interviews and everyday practice.

This little book isn’t a multimillion bestseller for nothing. It contains techniques and step-by-step plans which are highly effective in everyday life, both for managers and everyone working with other people. The book is very easy to read (just take a Sunday afternoon), well written, has good examples to elaborate on the important key points, and leaves you with a lot of things to think about. Not only about effective goal setting, but also about social behavior and the psychological consequences of actions.

Furthermore as an academic student I like the model in which it can be summarized:  “The One Minute Manager Game Plan” which is shown in the figure below. It’s easy to understand, has a high level of logic and summarizes the essence of the book. Like I stated in the introduction my overall opinion is:   “Good books don’t have to be long !”

I can advise this book to everyone, and want to thank the writers Blanchard and Johnson for the great way they have written down their story. I think I will see if I can get another book from the series: “The One Minute Sales Person“.

Don’t forget to check out the Harvard Business Review article Managing Oneself of Peter F. Drucker, a really insightful article when it comes to personal development and self-awareness. “Kenneth Hartley Blanchard is an American author and management expert. His book The One Minute Manager (co-authored with Spencer Johnson) has sold over 13 million copies and has been translated into 37 languages. He has coauthored over 30 other best-selling books. […] Blanchard is the “chief spiritual officer” of The Ken Blanchard Companies, an international management training and consulting firm that he and his wife, Marjorie Blanchard, co-founded in 1979 in San Diego, California. Among many accolades, Blanchard has been honored as one of the top 10 Leadership professionals in the international Leadership Gurus survey for 2007 and 2008. The “Leadership Gurus survey” award, by Global Gurus International identifies the top and most influential Leadership professionals in the world by merit and public voting. Blanchard is a Cornell University trustee emeritus and visiting professor at the Cornell University School of Hotel Administration.  He and his wife were named Cornell Entrepreneurs of the Year in 1991.”