The Wahoo Tickr X is a heart rate sensor that was used by team Sky in the recent Tour de France 2016 stages (in the Pyrenees, the  jerseys are wide open).

The Tickr X is Wahoo’s flagship heart rate monitor featuring dual band ANT+ and Bluetooth 4.0 wireless capabilities. The build-in memory can record up to 16 hours of training. The Wahoo Tickr X can be connected to almost every iPhone or Android smartphone, but also a wide range of tablets and ANT+ enabled devices like for example cycling computers.

Personally I use the Wahoo Tickr X in combination with my Pioneer Pedaling Monitor System (SGX-CA 500 computer and SGY-910HL  power meter). 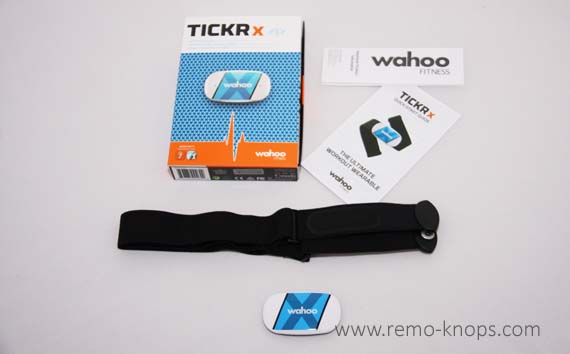 Wahoo Tickr X comes in a small colorful box that includes the heart rate sensor, with a  CR2032 battery installed.

The package contains furthermore the adjustable soft strap that can be snapped on the Wahoo Tickr X heart rate monitor, a quick start guide and important product info guide.

You can also head over to the Wahoo TICKR online instructions  if you don’t want to read the paper quick start guide. 🙂 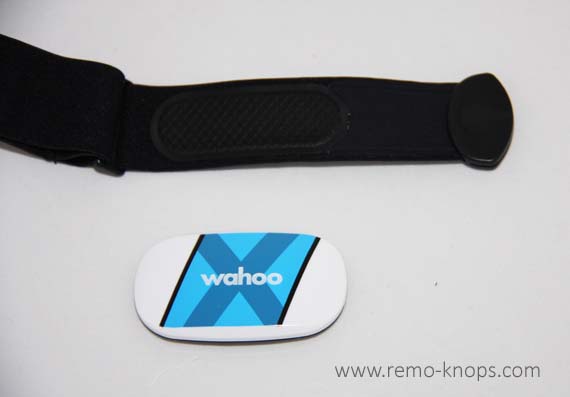 The heart and brain of the Wahoo Tickr X is the white unit that contains the Bluetooth 4.0 and ANT+ sensors.

You directly notice the striking blue Wahoo logo with the dark blue X in it. The normal Wahoo Tickr doesn’t have this dark blue X, while the Wahoo Tickr Run has the characters run in dark blue on the right side of the logo. So visually you can see the difference between the three versions as well.

In the white area left and right from the Wahoo logo there two small dimple visible when you look over the surface.  Under the right dimple there is a red LED that flashes as soon as the sensors on the strap register a heart beat. Under the left dimple, there is a blue LED that flashes to indicate the connection state of the Wahoo Tickr X.  The overview below shows the three different connection states of the Wahoo Tickr X:

The side views of the Wahoo Tickr X aren’t spectacular. 🙂

You can see that the white front part is snapped onto the black backside in a firm and seamless way. When you push on the unit or try to torque it, it simply doesn’t bend and no creaking sounds can be heard. It simply feels like  high quality assembly and product design.

The back side of the Wahoo Tickr X is more interesting because it contains a lot of information.

On the left and on the right you see the snap on buttons and note the cut-out that lock the elastic strap in one place (without rotating or movement). In the middle you have the housing for the CR2032 3V battery that powers the Wahoo Tickr X. With a coin you can open and close the housing, while lock-logo’s and an arrow visually show that the battery-door is locked. 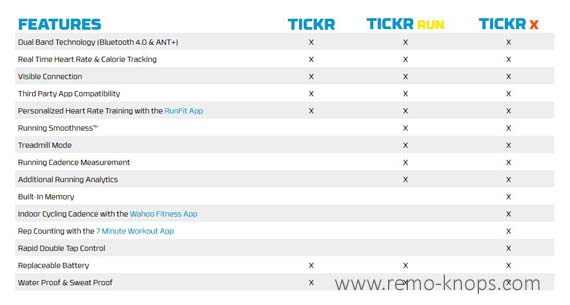 The Wahoo Tickr X is the only version with build-in memory that can store about 16 hours of training. So if your Wahoo Tickr X isn’t connected to a smartphone for example, you can still do your running and sync your work-out afterwards. The motion sensors in the Wahoo Tickr X capture also cadence.

The Pioneer SGX-CA 500 cycling computer directly captures the heart rate date during an exercise, where the Pioneer SGY-910HL  power meter on the  left Dura Ace 9000 crank captures the cadence.

Featured Apps that work with the Wahoo TICKR X

The build-in memory turns the Wahoo Tickr X into a data-collection-platform. Featured apps for various sport-types can be used in combination with a Bluetooth capable Android- or Apple smartphone.

In my opinion all leading apps for running, cycling and fitness are available. This is especially helpful when you are travelling and you don’t have your complete gear with you (for example your own road bike).  Also the  7 minute workout is a great to fire your muscles. 🙂

Check out the apps section of the Wahoo Tickr X product page to check out the complete list of Wahoo apps, 3rd party apps and specific apps for the Wahoo Kickr indoor trainer. 🙂

“The Wahoo Tickr X is the ultimate workout tracker that captures both motion and intensity. Equipped with Bluetooth 4.0 and ANT+ dual-band technology. Tickr X pairs seamlessly with your smartphone and works with tons of apps like RunFit, 7 Minute Workout and more! Plus, its built-in memory gives you the freedom to train without a phone, capturing heart rate, calorie burn, and workout duration to sync with your phone later.”

It started with the Polar Protrainer XT and the Polar heart rate sensor roughly 15 years ago, and over the years I have ridden with various brands of heart rate monitor (straps). The Wahoo Tickr X is among the most comfortable ones, even on long and hot summer rides of 5+ hours.

Unique for the Wahoo Tickr series is the dual-band technology. Personally I mainly use the ANT+ protocol to connect with the Pioneer SGX-CA500 computer of my Pioneer Pedaling Monitor System. However I did some tests with the Wahoo fitness application on an Android smartphone.

I’m sure you can get cheaper ANT+ heart rate sensors, but the Wahoo Tickrs are well build and of good quality. You can replace the battery yourself (not needed) and you can get a spare strap for about € 20,- So overall the price points are fair for the value you get.

If you are in the market to get a new or replace your current heart rate sensor, you should certainly put the Wahoo Tickrs on your short-list.