You are here: Home / Microsoft / Windows Phone / TouchDevelop – Programming on the go 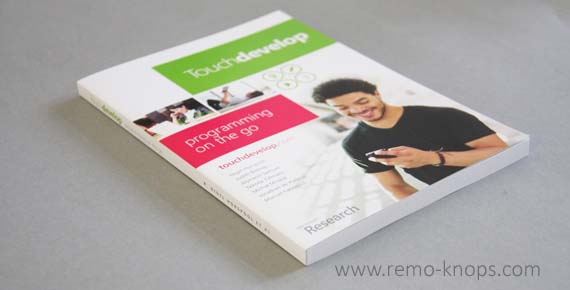 “TouchDevelop is a novel application development environment which allows anyone to script their mobile devices anywhere- it does not need a separate PC. Scripts written using TouchDevelop can access data, media and sensors on phone, tablet or PC. The script can interact with cloud services including storage, computing and social networks.”

Compare TouchDevelop with Microsoft Visual Studio 2012 which is the development tool of professional application developers.

“The book systematically addresses all programming language constructs, starting from the very basic constructs such as variables and loops. The book also explores many of the phone sensors and data sources which make creating apps for mobile devices so rewarding.”

Personally I don’t have a background in software development, so this start with basics like value types, variables and statements, actions and events is really helpful. The basics are mainly covered in the first 3 chapters from the book.

In chapter 4 and further it is explained how you can use different data sources, web services, media types and sensors from your Windows Phone. So you can create simple scripts that show a hello world text on your screen to really advanced games and applications. 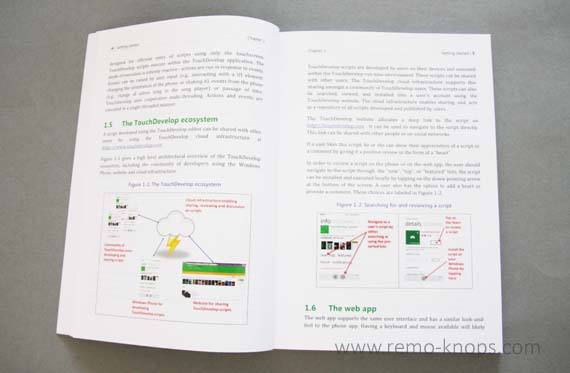 Scripts that you’ve created can be stored on the TouchDevelop website and shared, so that other TD-users can re-use your script or include it in their project. You can also share your scripts from the website via social media or review scripts from others. In other words there is a cloud infrastructure that enables sharing, reviewing and discussion on scripts.

“TouchDevelop lets you write scripts on mobile devices and traditional PCs. Any user can install, run, edit, and publish scripts in our cloud. Scripts can be exported to the Windows Store or Windows Phone Store, or shared as cross-platform HTML5 Web Apps..”

This means that TouchDevelop not only covers the Windows platform, with Windows Phone and Windows 8 (RT). Apple iPad, Apple iPhone, Apple Mac(book) and Google Android devices are support as well, as shown with some examples in the video above. Personally I think it opens a great opportunity to work with this development tool on every major (mobile) platform. 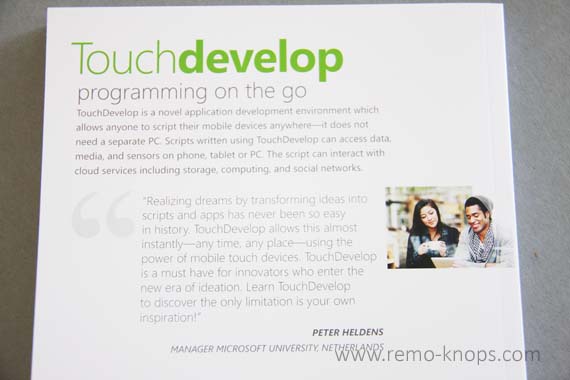 Peter Heldens, Manager Microsoft University, Netherlands describes TouchDevelop on the back of the book as:

“Realizing dreams by transforming ideas into scripts and apps has never been so easy in history. TouchDevelop allows this almost instantly -any time, any place- using the power of mobile touch devices. TouchDevelop is a must have for innovators who enter the new era of ideation. Learn TouchDevelop to discover the only limitation is your own inspiration!”

Personally I think that TouchDevelop is a great way to learn scripting and programming in a simple way. The book “TouchDevelop – Programming on the go” by Microsoft Research is a great resource that will help you gain the maximum knowledge out of TouchDevelop.

It is a very complete reference loaded with tables, script samples and the theory is build step-by-step. The only thing you have to do is download a copy the book, install it on your Windows Phone (or alternatively login to the Web app) and start scripting.

There are already 25902 scripts published, so get started and upload your scripts.

Check out a table with other interesting book reviews on this page.