You are here: Home / Professional / Books / Who moved my cheese ? (Johnson) Book review

In this article I will review the book “Who moved my Cheese?” – An amazing way to deal with change in your work and in your life. It is one of the most succesful business books ever and written by  Spencer Johnson co-author of The One Minute Manager ~ (Blanchard & Johnson, 1983) and The One Minute Sales Person  ~ (Johnson & Wilson, 1984). 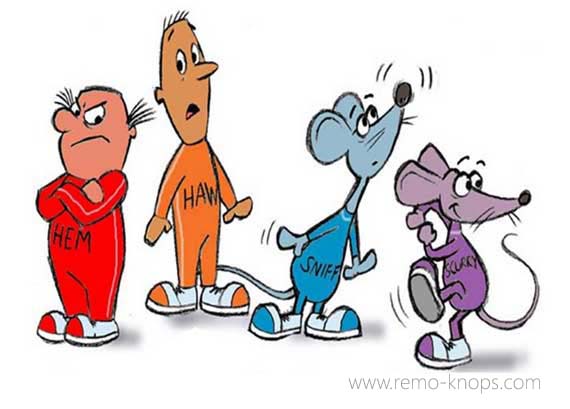 The Who moved my Cheese story features four imaginary characters.

Cheese and the maze

“Cheese is a metaphor for what you want to have in life – whether it is a good job, a loving relationship, money or a possession, health or spiritual peace of mind. The maze is where you look for what you want – the organization you work in, or the family or community you live in.” (p. 12)

Cheese, maze as well as the four characters are well chosen metaphors. It is not only easy to picture them, but it is very easy to remember the story line, rethink and map the metaphors on situations in your personal or work-life.

Who moved my Cheese – The Story

“Once, long ago in a land far away, there lived four little characters who ran through a Maze looking for cheese to nourish them and make them happy.”

Sniff and scurry used an experimental method of finding cheese (simply put by trial and error), while Hem and Haw used their ability to think and learn from past experiences to find cheese. However it didn’t take long before the four characters found cheese in the corridor of cheese station C.

Based on the success of finding a large storage of cheese, the little people and the mice developed their own routines.  Hem and Haw knew were the cheese was.

The little people felt happy, successful and “thought they were now secure”, moved their homes close to cheese station C and built a social life around it. After a while Hem and Haw’s confidence of finding the cheese grew into arrogance of success, while in comparison Sniff and Scurry  used their simple daily trail and error routine for finding cheese.

Change … or not to change

Hem and Haw became comfortable and didn’t notice the change. Each day the stock of cheese was getting smaller and smaller, until there was no cheese left.

Sniff and scurry noticed the decline due to their simple but effective daily routine and simply moved on searching the maze for new cheese. Hem and Haw however were unprepared and Hem shouted “Who moved my cheese?” (p. 33). Because cheese is important to the little people (success) they spent a long time thinking, analyzing and trying to decide what to do. However the result was looking around cheese-less station C (day after day).

Haw suggested “Maybe we should simply stop analyzing the situation so much and go find some new cheese?” However Hem held on to the current cheese (that made him successful) and didn’t want to change.

While the little people were think and analyzing Sniff and Scurry used their simple routines and already found a new storage with cheese, cheese station N. Hem kept on asking “Who moved my cheese?”, while Haw questioned “Why didn’t I get up and move with the cheese sooner?” and starts with hand-writings on the wall.

These hand writings help Haw making the change. He became aware that his own fear held him captive and decides to go into the Maze in search for new cheese.  During his journey through the Maze he leaves a trial of hand writings, just in case if Hem could let go of the current cheese-less situation …

“It is safer to search in the maze, than remain in a cheese-less situation.” (p. 62)

During Haw’s search in the maze he learned a lot about change and  more importantly about himself and his behavior towards change. Haw leaves a  significant number of handwritings with wisdom for Hem and eventually finds Cheese station N.

Haw gets reunited with Sniff and Scurry who are in cheese station N for some time. Cheese station N is the largest pile of cheese the characters have seen in their life (and Hem is still holding on to his cheese-less situation).

The core essence of Who moved my cheese? can be summarized in the so called “Cheese station N Handwriting on the wall” which is represented below. A larger version in PDF-format can be downloaded, on the condition that you “Share it with others” ! 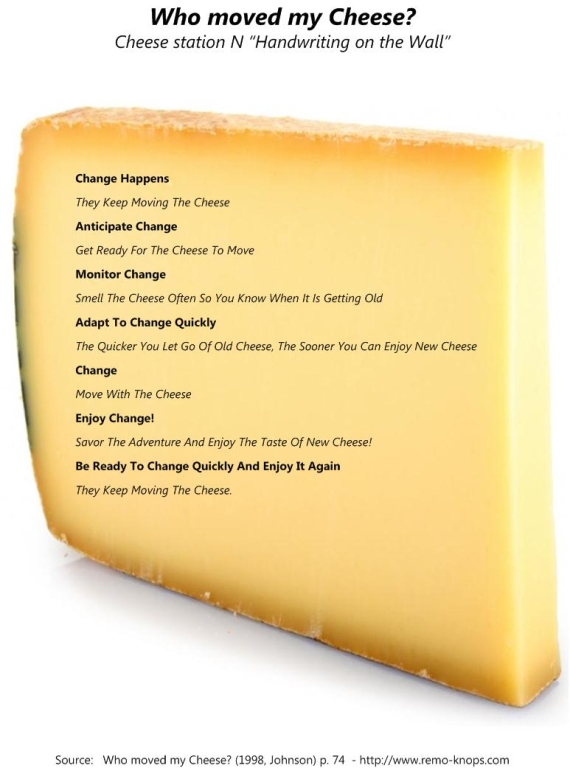 Who moved my cheese? is one of those small books that provide you with a great amount of thought, despite the fact that someone is able to complete the book on a Sunday afternoon. According to Spencer Johnson the story will help you to:

The four characters are intended to represent the simple and complex parts of ourselves, regardless of our age, gender, race or nationality. The metaphors cheese and maze help you visualize a process of change.

I think everyone is able to map the “Who moved my cheese?” story onto past situations in his personal- or work life. It makes you rethink situations or helps you adjusting your behavior, when you are in the middle of a change process. 🙂 The simplicity of the story makes it extremely powerful and useful. 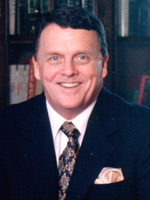