I will briefly review the Viiiiva in this article that can also work as an ANT+ to BT Bridge. 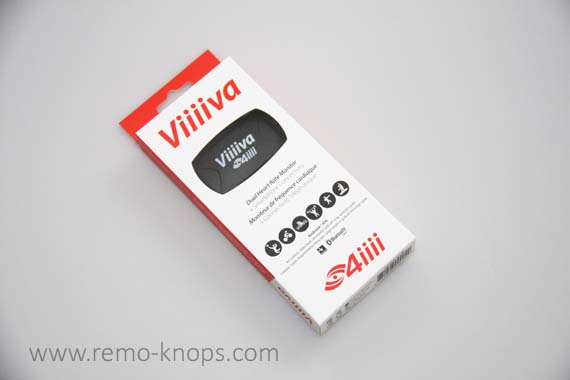 Wahoo recently launched the new Wahoo Ticker and have a long term history with Polar devices, so how do I end up with the Viiiiva Heart Rate Monitor from Canadian company 4iiii.

Being a Polar Vantage M user, my initial focus was on the Polar H10 Heart Rate Sensor. The Polar H10 unfortunately uses a CR2025 battery and not the CR2032. So one of the requirements for a new heart rate monitor was the CR2032 battery. Simply because I buy those CR2032 in bulk and keep both the Pioneer Dura Ace 9000 Single Leg Power Meter model SGY-PM910HL and heart rate monitor charged. Both the Wahoo Tickr-X and the 4iiii Viiiiva Heart Rate Monitor have such a CR2032 battery. 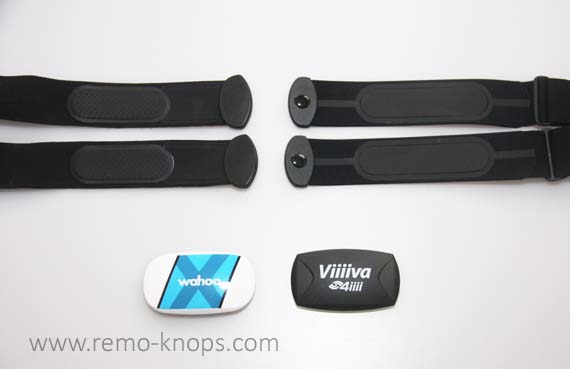 When looking at the new Wahoo Tickr (certainly don’t need the new Tickr-X on my bike) I stumbled upon the discounted 4iiii Viiiiva. In terms of form-factor both the Wahoo Tickr and the 4iiii Viiiiva are very similar.

When you look at the comparison shots of the old Wahoo Tickr-X and the Viiiiva above you can see the similarities. The electrodes of the Viiiiva are larger/wider (roughly 1.5 times) and you can see the press-pins on the Viiiiva strap-ends. However from a hardware point of view, except for the ANT+ to Bluetooth bridge part, the technological base and form-factor is very close.

When I started doing my research I’ve read a couple of reviews where the 4iiii Viiiiva was used in combination with the Wahoo Elemnt Bolt, and the conclusion was: “works flawlessly and stable.” Combined with the discount (see concluding thoughts) on the Viiiiva this was for me the trigger to add this heart rate monitor to my shopping cart. 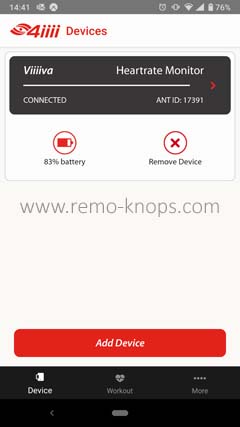 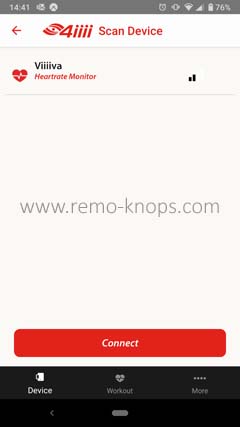 The 4iiii Sport App is basically a companion app to configure and update your 4iii product. At the time of the 4iii Precision Powermeter review the app was labelled as 4iiii Device Configuration Android App.

You download and install the app from the Google Play Store and turn on your Bluetooth connection.  When you have strapped on your 4iiii Viiiiva you simply hit the add device button in the Sports app and the Viiiva is found quickly. It will show up in the device tab of the mobile application.

The 4iiii Sports App has 3 different work-tabs as you can see in the break-down below:

Most of the work-tabs are intuitive and pretty self-explanatory. 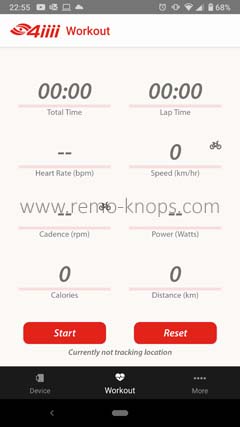 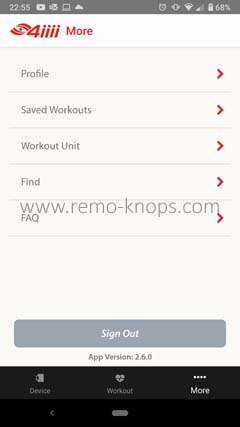 In the first Device work-tab you can add devices to the 4iiii App by hitting the add device button. As mentioned the Viiiiva was found straight away, and in the default list view you can see the device ID, name and connection status.  By opening the details of the Viiiiva you can rename, check the firmware version (and update when needed). You can download activity files, and for the next paragraph on ANT+ to Bluetooth Bridge the ANT+ Pairing Settings button is important.

In the second Workout tab, you can record an activity like you would do on a smartwatch or cycling-computer. Now you only record this on your smartphone within the 4iiii App. This can be helpful in running or fitness scenarios. Personally I will hardly use it. 🙂

In the last work-tab More you can change Profile details, check your saved workouts or change the unit (metric or imperial).  The last options you can select are FAQ and a find option for your 4iiii devices on a Google Map. 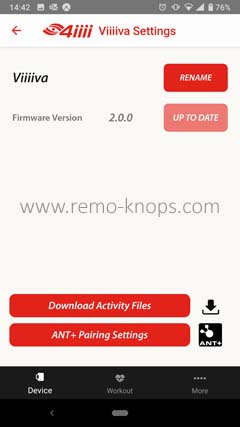 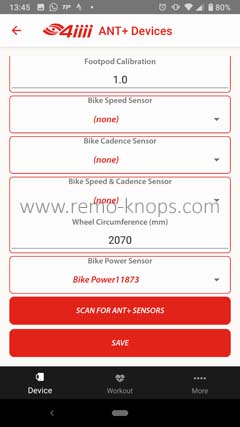 4iiii Viiiiva as the ANT+ to BT Bridge

A unique feature of the Viiiiva Heart Rate Monitor is the functionality to act as a bridge between ANT+ and Bluetooth devices. On the 4iiii Viiiiva product page you can read:

James from TitaniumGeek published a review where he focusses on connecting his ANT+ power, speed and cadence sensors to Zwift for iOS (bluetooth). I might will give Zwift or TrainerRoad a try during the winter period, but for now I simply run my indoor training sessions directly from the cycling computer and Tacx Training App on my Android smartphone.

But if I will try one of these online services I’ll probably need the ANT+ to Bluetooth Bridge functionality as well. 😉 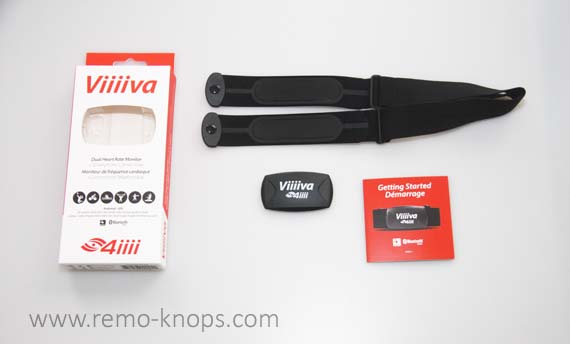 Canadian company 4iiii is known for its Precision and Podium power meter models, that can be found on the world tour bikes of Peter Sagan and more. However they have also the Viiiiva Heart Rate Monitor in their product range. For me this product has been under the radar given the other suppliers of Heart Rate Monitor (straps) for example Polar, Wahoo and Garmin.

Given my personal experience with the 4iiii Precision Powermeter and the 4iiii Device Configuration App it was a rock solid option for me to get the 4iiii Viiiiva. Only disadvantage is that it is harder to find a replacement strap via other distribution channels than the 4iiii online shop.

The Jumbo Visma cycling team is using the 4iiii Viiiiva as well. You could see it for example during stage 17 in e Tour de France 2020 to Col de la Loze, when the shirts open up. 😉

What heart rate monitor are you using ? And would you need the ANT+ to Bluetooth bridge ?